Match Report: Honiton vs All Whites

Match Report: Honiton vs All Whites


First and foremost from all at Newton Abbot Rugby Club, once again we extend our deepest condolences to Ben Spear’s friends and family. we have all been shattered by the news and were set to postpone this weekend’s games. Ultimately, it was Ben’s love for rugby and the fact he would move mountains to play a game, that we felt we simply had to follow his example and play.

This week started with the tragic news for the NARFC family with the death of Ben Spear. Training on Tuesday was cancelled and replaced with a team welfare meeting at the club to reflect and talk about the recent events how we are going to continue with the rest of the season.

Although this was hugely upsetting and emotionally exhausting our players supported each other and opened up to each other about the mental health issues that they currently or previously have been dealing with. This was massively valuable to the team. A couple of players have now reached out for professional help and several others have since opened up to me or other members of staff at the club. We look to support each other through this tough situation and we’ll stick together like the family we are.

If you’re from another club reading this please reach out to your players, community and family. No one should feel like they can’t talk about how they are feeling.

I am personally struggling to digest the news that someone so young and with so much character has left us so early. RIP Ben.

You won’t be forgotten. A huge loss for everyone.

Honiton vs All Whites – Match Report

This first game after such news was always going to feel out of place, credit to our matchday official and our hosts, who showed real empathy and understanding before KO, with heartfelt minute applause observed across both pitches.

As for the game, I wasn’t surprised to see us start with a Big Ben Bang; we were relentless, there is no other word for it. Across the park, set piece, defence, down the bus lanes in the wider channels we went about a business with real intent. As a result, it took 2 minutes for us to register our first score, of which they seemed to come thick and fast thereafter.

It is often hard to keep your ‘shape’ when games start this way, however, we were at it for the full 80. All the more impressive given the noticeable patch up job with two forwards stating in the backline. George Heath started on the wing and Max Snowdon at the inside centre.

It was difficult to select Player of the Day with outstanding performances from Matt Wrayford, Josh Dore and Jake Monnington. Without a doubt, the deserved winner was Charlie Dore who had a faultless game and carried superbly throughout the game.

Next week will be a monumental test for us with the leagues from side coming to Rackerhayes on the Westaway Sausage Pitch with their tales well and truly up. We will need to ramp things up again if we are going to take anything away from this encounter.

The win against Honiton has secured a Home Final in the Intermediate Devon Cup on the 30th of April. We will be either playing Kingsbridge or Teignmouth as it stands, with our fixture against Kingsbridge having an influence on the Final fixture. On current form, I would argue, Teignmouth to beat Honiton, Kingsbridge are likely to beat Paignton, leaving the ball in our court to whether we play Teignmouth or Kingsbridge in the final. We beat Kingsbridge this weekend and send them home without a point and it’s likely we’ll meet Teignmouth in The final! What a day that will be.

We currently sit at second in the league and as the top 4 go up, we are looking at promotion too.

On a very emotional day for all at Newton Abbot rugby club the Spartans hosted a strong Crediton side. The Spartans with a bare 16 players many of which out of position knew they were in for a tough game on a hard pitch. Crediton started fast and were soon 15-0 up before a try by Liam Spruce converted by Ryan Maunder made it 15-7, another score for Crediton just before the half made it 22-7 at half time. A good start to the second half saw Luke Moore break through while juggling the ball to score with Ryan Maunder again converting making it 22-14. Crediton made some changes and started to put some more tries on the board as the Spartans began to tire after some superb prolonged defensive work on their own line. As the full time whistle went the score line was 55-14 to Crediton.

Joint man of the match award went to Lee Williams and Danny Perryman both of whom helped out at late notice with little rugby under their belts for a while and both propped a full 80 against a very strong and experienced Crediton front row.

A special mention must go to Mark Spear the father of Ben for playing a full 80 minutes in Ben’s position on what must have been a very tough day for Mark and his family, you did your boy proud!

Newton colts put in a dominant display against Kingsbridge rfc in the final round of the colts cup. Final score was 13 – 40 to the all whites leaving them 4th in the Devon colts league. 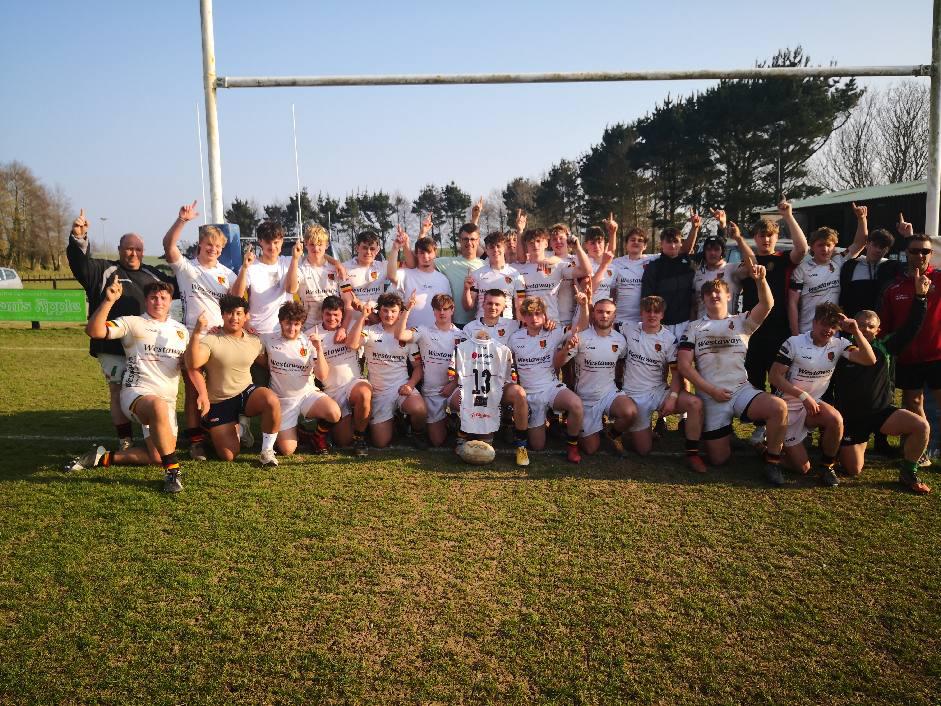